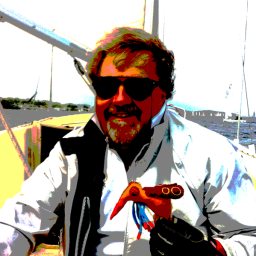 Steve Scott the Banner Guy is a serial entrepreneur with a passion for customer service, marketing, design and providing all his clients with far more value than they will ever pay for.

Banners have a reputation for being a little "Old School" and past their use by date.

Steve is changing that view by providing banner designs that use his marketing savvy, combined with vivid colour and design that you don't often see anymore.

Is an Olympic Sign or Olympic Fan Banner on your list of things you need to do for the Games?

I love the Olympics, once every four years is just too long a wait, I enjoy it all. I also get an Olympic kick in my role as the Vinyl Banner Guy, let me explain.

The Olympic Games (and the Special Olympics too) offer me the opportunity to help people like you, at this special Olympic time. It is very rewarding and fascinating too designing banners for the Olympics, and each one tells a story of triumph.

To be able to help you enjoy your Games that little bit extra, and support your Olympic Star in a very NOTICEABLE way (with the help of a custom made Olympic Sign or Olympic Fan Banner) give me great satisfaction.

You can use your Olympic Sign at home to “Fly the Flag” or take your Olympic Fan Banner to the Olympics should you be fortunate enough to be there in person.

This is what I think an Olympic Sign or Fan Banner is about.

Imagine the main Olympic Stadium, thousands of people in awe of the spectacle. Looking up from the field is your Olympic Star, taking it in – “The Olympics”, they have made it. How will they feel when scanning the crowd, when they see your special message (or picture – whatever) looking back at them from the stands. How will they feel…Will they lift?

What do you see as you scan the crowd?

You can see others holding up their own Olympic Signs and Olympic Supporters Banners, many made by hand from bed sheets and the like.

Don’t get me wrong , I love seeing these Olympic sentiments, they do their owners proud, and they have heart.

Your Olympic Sign can have the same “Heart”, though yours will be professionally designed, an Olympic Sign that will be noticed (and maybe even on TV).

Let me help, you will stand OUT!

Or will it just be another good idea gone begging. Don’t let it be. Time is ticking away and what will it mean to am Olympic Sports Person to see an Olympic Sign or Olympic Fan Banner just for them.

It does not matter if your Olympic Banner supports your country, your team or just the Olympic movement.

Perhaps your Olympic Banner will be for a relative competing in the Games. Congratulations by the way if this is the case ?

Olympic Fan Banners are fantastic. They have the power to make very special people feel – SPECIAL. And That’s the bottom line.

If you need an Olympic Sign or Olympic Fan Banner, now is the time to get started.

Click on the Big Red Button below and let me help you get started. Prices Start from as little as $115 delivered in Australia. International shipping is at cost.

Have a Great Olympic Games, I know I will.